As some of you may be aware, I suffer from mental illness. As such, I have good days and bad days. It was one of those borderline days where I had moments of clarity and focus and other moments where I’m not entirely sure my brain was functioning past the essentials of breathing and making my heart beat. But with such delightful January weather, a trainer who cares about me and wants me to succeed, and a horse as fabulous as Audio, it would simply be a crime to stay in bed.

We started off with some trotting. My goal was to really focus on keeping Audio moving. But due to one reason or another, I scarcely had the energy to two point a whole lap before collapsing. It’s like we all used to say to the riders at my summer camp: you’re clearly not drinking enough water. With a few more frequent water breaks, I was able to persevere, though it was not my best lesson ever. When I was younger, I would tell myself that every rider had good rides and bad rides, that it could only go up from there. But now that I’m paying for things myself, it’s a little more distressing to have a bad lesson.

We cantered a little bit before doing some raised cavaletti because, according to Megan, it simply felt like a cavaletti day. We had some trouble because I kept approaching it like a jump. Audio got very flustered when I fell behind the motion; in an attempt to right the situation, he would try to canter through the cavaletti (which were set for a trot) and we ended up taking down the same one three separate passes. Whoopsies… When I focused on Audio’s rhythm, we did finally trot through, but I was still behind the motion. Megan suggested approaching in two point to eliminate that problem, and we had much better success. Audio has some serious suspension. He loves to show off his bod. 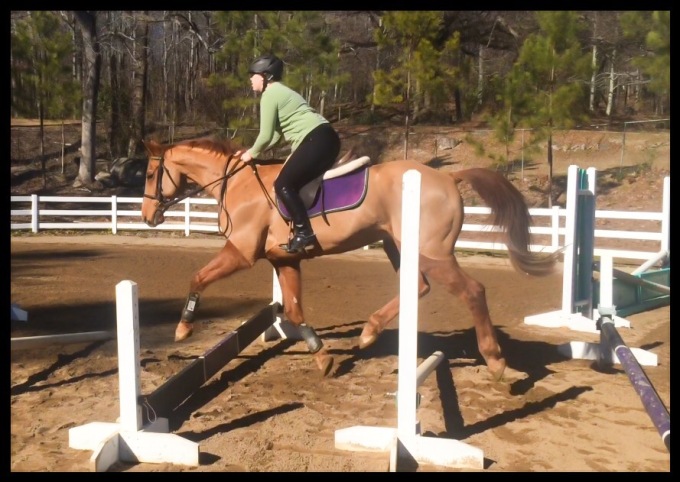 With the three of us pleased with the cavaletti, we moved on to some jumping. I have at last been granted the permission to warm up on a line instead of a single. (Elated cries of “I’m a big kid now.”) It was an outside line of big crossrails set in an easy five strides. If Audio cantered in, it probably would have been a four since he has that huge thirteen foot stride. I did have a little trouble seeing my distances quickly enough to make any major adjustments to his strides. I’m gonna chalk that up to the eye infection that is forcing me to wear glasses instead of contacts (real talk though, we all know I can’t see a distance to save my life). We did this line forwards and backwards.

This line built started the construction of a small course. I really like the way Megan builds me up to a course. It keeps my mind from racing so much. I may have been jumping for nine years, but courses are still scary. Thanks for the anxiety disorder, brain. The course was the line and then right turn to a single gate. For some reason, I could really see the distance to the gate. Each time I approached it, I could just zone in on that distance. It felt great to see a distance so confidently and clearly.

The finishing course was the line to the single and rollback to a one stride. The line wasn’t bad. The single was great. I was tad behind in the one stride but managed to finish great. Audio was such a good boy. He takes good care of me and deals with whatever distance I throw at him with style and flair. Bless that horse. The one stride was particularly fun!

Things to work on in my free ride:
– no stirrups
– distances
– endurance