Guys, this summer has been crazy. As soon as I finished my spring classes, I had a major job for my freelance writing business. It took literally my entire week between spring classes ending and summer classes starting, but that big ole paycheck makes my growing credit card debt much happier. Adulting is HARD. Since then, I’ve been taking summer classes. I’m taking four 3-credit hour classes this summer in ten weeks. (Two classes per five weeks!) it’s been crazy. But after this summer, I will be entirely done with my minor, which puts me that much closer to graduation!

Last time I was home in Atlanta, I also got to see Eliza, who was my freshman roommate at my first college. Eliza has always been kind enough to share her horses with me whenever I need, plus we always have some crazy adventures. Eliza is one of those lucky people who just *gets* my sense of humor, so we always have a great time. Recently, she’s been bringing along her upper level prospect, Dauntless B. He’s like a big dinosaur who has the good attitude of Chuckie the doll and the movement of poetry–when he is sound. Poor Eliza has been trying to keep this goober sound for so long, but Danny enjoys things like cutting his leg open in the pasture or pulling shoes and kicking himself. Let’s just say Danny is lucky he’s cute.

During my week home, on top of work, I also had a close family friend pass away unexpectedly. Eliza’s cure was a ride on her mare, my favorite Indie! 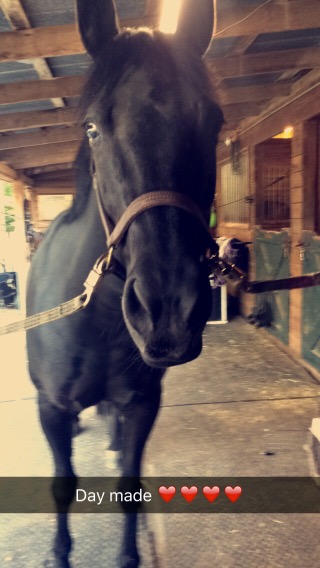 Y’all remember how hard Courtney worked in October to finally (and successfully) teach me how to ride leg to hand? Well, my muscles weakened. But I was still able to ride Indi like that for the most part. I was so excited! Eliza and her mom, who have seen me ride for YEARS, both commented on how I had improved in that small aspect alone. It was one of my prouder learning moments. My only regret was forgetting to ask Eliza’s mom to snap some video for me. But I did get some love bug pictures, so all is not lost.

Other than horses and school, your favorite blogger has been chronically ill yet again. I have seen 10 doctors since my summer started May 6. I’ve also had surgery for a pilonidal cyst. (No surgery pictures this time! I promise! I was in and out in about twenty minutes.) My mom has been taking good care of me. If you have had a pilonidal cyst, you know how excruciating they can be. If not, look it up. They’re gross. It’s made everything painful: driving, sitting, lying down, standing up, wearing pants with thick seams, wearing heels, and pretty much anything else you can think of. But I’m nearly healed now. I even survived my best friend from school’s wedding with it. She was a beautiful bride, and yes I cried the entire ceremony.

I’m hoping once I get this round of medical issues taken care of that I can get back out and continue training with Courtney. Stay tuned. I’m dying of pony withdrawal!