Sorry for the delay, y’all. Between being sick and hiding from the world for a bit, this post is overdue!

I walked into work and closed up my umbrella and took off Remy’s raincoat. My coworker, Mark, bid me good morning: “Welcome to the Sunshine State, Kelsey.” Welcome, indeed. It was practically a monsoon outside, of course, on the first day I had gotten to ride in months. And it rained. All. Day. Long.

Even though the barn and my office are only about twenty minutes apart, it had quit raining a couple hours earlier down south. After texting with the trainer for a little while, I decided to make the drive down to the barn anyways. It had been a stressful day after a long week, so sitting in traffic made me that much more tense.

There’s this weird thing in my life where names occur repeatedly. I don’t know if that’s like an actual thing, or if that’s just the pareidolia aspect of my anxiety, but either way, names always get repeated in my life. As if it wasn’t ironic enough that the girl who was lessoning with me was also named Kelsey, my new trainer’s name is Amanda, not at all to be confused with Amanda Lee. Yeah, welcome to confusion in my brain, y’all. But I digress…

Amanda told me that my ride today was Wyatt.

Okay, I need to digress again. The first horse I lessoned on when I was in school in Virginia was also named Wyatt. And it was a fantastic lesson. My coach described him to me as, “He is literally so perfect, he farts rainbows.” She wasn’t kidding, either. Wy-wy was magnificent.

Wyatt is a sweetheart, honestly. Amanda said he was the perfect horse to ride to just relax after a hard day. His version of “being naughty” was turning his head sideways and just a little bit of laying on your inside leg. And he did not like his front right hoof to be picked. That was it. That was my only problem with him the whole time, from pulling him out of his stall to putting him away. He was wonderful.

Because the arena was a pit of fresh clay, we decided to do a flat lesson. Even then, we stuck to the walk and trot. I haven’t ridden but a handful of times since I broke my ankle, and I’ve taken fewer lessons than that. So I was grateful that Amanda decided to take it easy on me. Living on a second-floor walkup and working on the second floor (again, no elevator) may not sound so bad, but when you’re sore from no stirrups or lack of consistent riding, that one flight of stairs seems like the cruel and unusual punishment.

A lot of my old habits have come back in my time off. Or did they even ever go away? I still have trouble keeping my fingers closed. And I still over-post to compensate for my lack of leg strength. And my shoulders still drop. And my leg still pitches forward. What was surprising, though, was how quickly I was able to correct these issues and they even stayed corrected. By no mens did I perfect these issues, but I didn’t hear nearly as many “Close your fingers” as I have in the past. Same goes for shoulders and posting. The leg, though, is an issue as always. This problem did prompt a discussion about saddle fit, both on horse and on rider.

Guys, it’s so hard not to name drop about my job and tell you all about it because I’m learning a lot more about fitting saddles to riders and horses. I’ve ridden in probably hundreds of saddles at this point in my life, and I always knew there was more to the fit of the saddle than the seat size, but I’ve never had the opportunity to learn until now. The flap length and position makes a huge difference on where a rider’s leg will sit, which of course affects the rest of the ride. Similarly, the way the saddle’s cantle and seat hold a rider affects everything above and below the seat. My current saddle is not my favorite saddle, but it was a way for me to have a saddle that I knew would fit my leg. It’s an Ovation Jumping Saddle. They have fantastic leather, especially for something mass produced like this. But the problem is that their panels and seats have a really steep pitch, so it really pushes a rider’s hips forward and out of place.

Once Kelsey and I were both warmed up and stretched out, Amanda had us work on figure-8s at the trot. Hi, I’m the (self-proclaimed) IEA Queen. I was always so ready for this test in a flat class but I never got to ride it and honestly I’m very sad about it. A lot of people think that a figure-8 through the arena is okay. FALSE! I’ve done a rudimentary drawing here to show the correct path of a figure-8 in an equitation test type setting.

The red path is what a lot of people assume, including little Kelsey (the one who rode in my lesson, and also 13-year-old me before I had the correct path schooled into my brain). The green path is what needs to be performed. Judges and trainers are honestly not that impressed that you can ride down the short side of the arena and cut through the middle. That’s not impressive horsemanship. Frankly, two circles side by side isn’t that impressive either when you think about it. But the number of riders who cannot maintain pace or size in a circle is honestly surprising. There are also plenty of riders who forget to change their diagonal, change the bend of their horse, or flat out cannot make a second circle. Want to really impress the judge? Make a really circular circle. Make your circles as symmetrical or congruent as you possibly can. (Shout out to geometry class in high school for the word “congruent.”)

Amanda had me ride this figure-8 pattern four times so little Kelsey could see. It was honestly the confidence boost I needed. Since it’s been so long since I’ve ridden in a consistent program, I was worried, frankly, that I would suck. So even if it was something really simple that I did well, I still did it really, really well! And ya know, it’s kind of nice to be told that you do something well.

I talked to the best friend about it on the phone afterwards, told her how excited I was to get compliments on my flat work and on the figure-8. She asked me why I didn’t think I was good at flat work. Well, I told her, I’ve ridden so many horses and I have so many gaps in my education on basics that I always worry my riding doesn’t look like it should. After all, it’s been almost a decade and a half that I’ve ridden horses, and I just want to look as educated as I actually am (or supposedly am educated, anyways). Heather’s response? “Well that’s a shitty attitude to have about yourself.” And you know what? She’s right. That is a shitty attitude to have about anything but especially yourself. Attitude makes so much of a difference in how a person learns. So y’all, please remember how important your attitude is while you ride.

Before I left, I had to give Minka some love of course. She’s so sweet. She didn’t eat the apple I brought her, though. She took a bite and then left it alone. I don’t think she likes apples? Either that or, inevitably, she might need some dental work since she’s off the track and still growing. But there were cuddles a-plenty and Amanda told me it was absolutely possible for me to get her. Guys. Please remind me how broke I am. I can’t afford a horse right now because I can barely afford myself. 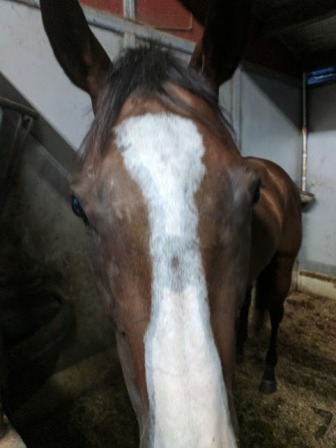 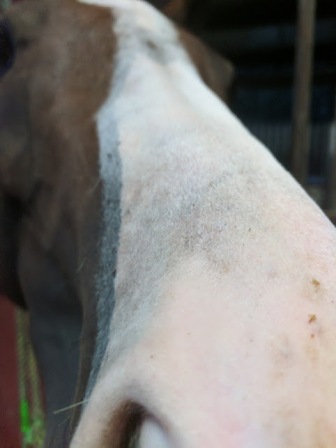 No worries. I’ll be riding again soon. And there are several updates to come regarding the blog, so stay tuned.

Until then, my dear readers, stay with me. ❤