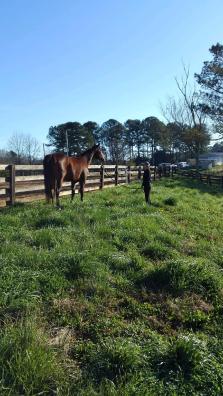 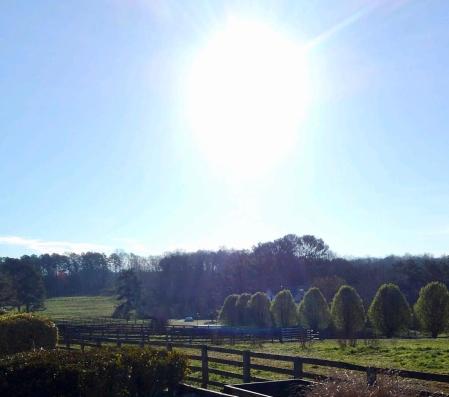 It’s not an easy decision to make when you know it’s time to break up with your current boarding barn. I knew it was our time when the ulcers seem to persist, and the cause was unknown. There had been problems in the past at this barn. This, however, was the last straw on my back. So, my hunt began.

I had at first thought of moving him only an hour north to Savannah. I worried though that the same situation may arise, as I know no one in Savannah. He would be closer, but I would be putting a lot of trust in someone I didn’t know. After a month of talking and mulling it over in my mind Atlanta had become my final decision. Despite the 5-hour distance, I had a very good feeling about this. I had texted my current trainer Miriam asking if there was space at her barn. There was not. I was upset that my first choice was full. I knew though I had to get him to Atlanta no matter what. I was in the midst of hunting down my previous trainer Kelly’s phone number when a text popped up on my screen. This text was my golden ticket. It read “well never mind, I just had someone tell me they are no longer coming.”  It was destiny I felt, as I usually have the worst luck. Trust me, stuff like that never happens to me. Atlas is now boarding with Christopher Avery, and training under Miriam in Canton, Georgia about an hour north of the good ole ATL.

I miss him like crazy every single day. I have lost some sleep wondering how he is. I know though he is safe, and evidently everyone is quite enamored by his charming personality. From the talks with my friend Ainsley, and the pictures I have received he seems very happy. I feel as though a weight has been lifted off my shoulders. I no longer worry about his overall well-being. I found the key to a healthy and thriving horse is ample turnout time, a good buddy or buddies, an abundance of grass, water, fresh well-cut hay, and decent food if it is desired to be given. Christopher’s place has provided all of this to my boy.

Our story of this adventure began on March 17th on a Saturday. We had been delayed as our hauling truck was tied up by my fiancé’s father using it. My stress level had risen from a 10 to a solid 12. We woke up at 4 A.M. on Saturday morning, with maybe three hours of sleep had that night. After wrapping his legs and brushing him off one last time, we attempted for a good 45 mins to load his butt on the trailer. Of all days to choose to not load, it was this one. He wasn’t having it. Of course, the only thing that convinced his fat ass to get on was a rattling bucket of food.

We were off by 5:30. We had decided to take back roads on our drive. My fiancé insisted on driving, which was probably for the best as I was a nervous wreck and slap exhausted from the week. The hauling had gone smoothly, and my boy was a trooper despite a seven-hour trip. We stopped once half way through to check water, hay, and share a granola bar as Ryan pumped gas. All went smoothly through the drive. The worst part was coming into Canton as traffic was stop-and-go, and the red lights every hundred yards. The trip was a success though. My thoughts of us crashing and burning up in flames were finally over. We had finally arrived! I took a deep breath pulling up. I could breathe again, and my tireless nervous shaking like a Chihuahua had stopped.

We began the unhooking and unloading of my boy. I let him settle down for a few minutes in the trailer, well at least I thought I had. The grand finale was him tripping over himself backing down the trailer and falling to his knees. Told you I have the worst luck.  He was fine though, thank god. He stood right up and began the looking around and the ear twitching of curiosity. We began our walk of looking around, and eventually put him in a stall to settle down. I was so pleased with the beauty of the place. Christopher the owner cared immensely that much was obvious. He spent the time asking me questions about what is best for Atlas. No subject was untouched by the time we left. I knew this was the right decision.

I have been asked many a times how I would not miss him, and what would I do to pass my time now. I miss Atlas every second of the day. I crave seeing him, and I am still sad about letting him go.  His well-being though, trumps any sadness I may ever have. Atlas is and will always be a huge part of my life. It was a difficult decision to put my feelings aside and know what was best for him. It has been a relief to feel as though I don’t have to follow behind people and pick up the pieces. This excludes the two workers at our previous barn, who were god sends at times. It was very obvious they knew a lot about horses and cared. Their guidance however was lacking. As for passing my time I am engulfing myself in school. The faster I finish the closer to him I can be. I am also enjoying things that have been placed on the back burner. Atlas was never a burden but picking up sed pieces was time-consuming in my already hectic life.

Atlas is enjoying his time off/ settling into his am new home until he finishes his Gastrogaurd. I am going up in two weeks to assess how he is and take a lesson if he is better. I am more than excited to see my boy.

If you are ever wondering when it is time to move, here is my advice: